Like the mosaic that graces its main entrance, the Howell Memorial Science Building comprises many smaller parts. When BJU moved to Greenville in 1947, the building did not exist. Instead, six prefabricated buildings housed science and home economics classes where Bob Jones Academy is now located.

The buildings were remodeled and enlarged in 1952, giving the science department dedicated physics, biology and chemistry spaces. Similar to the physics and biology modules, the new chemistry building included two laboratories, two balance rooms, stock rooms, offices and a theatre-type lecture room. The science buildings, which also housed Academy classes, were combined in 1960 into three of four current Academy buildings.

By the summer of 1959, BJU began planning a building for physics, chemistry, biology, electronics and home economics courses, giving BJU and BJA their separate facilities. 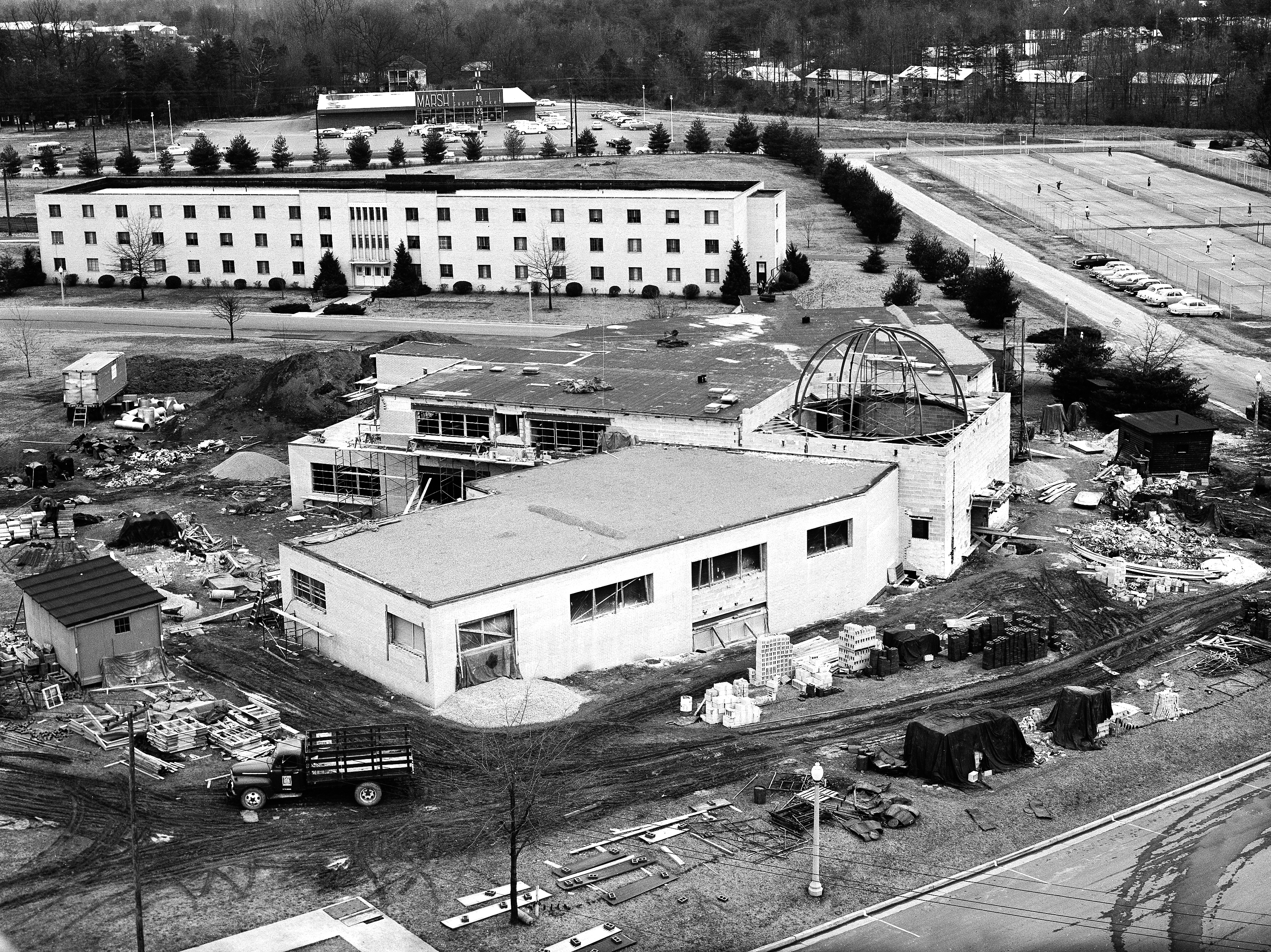 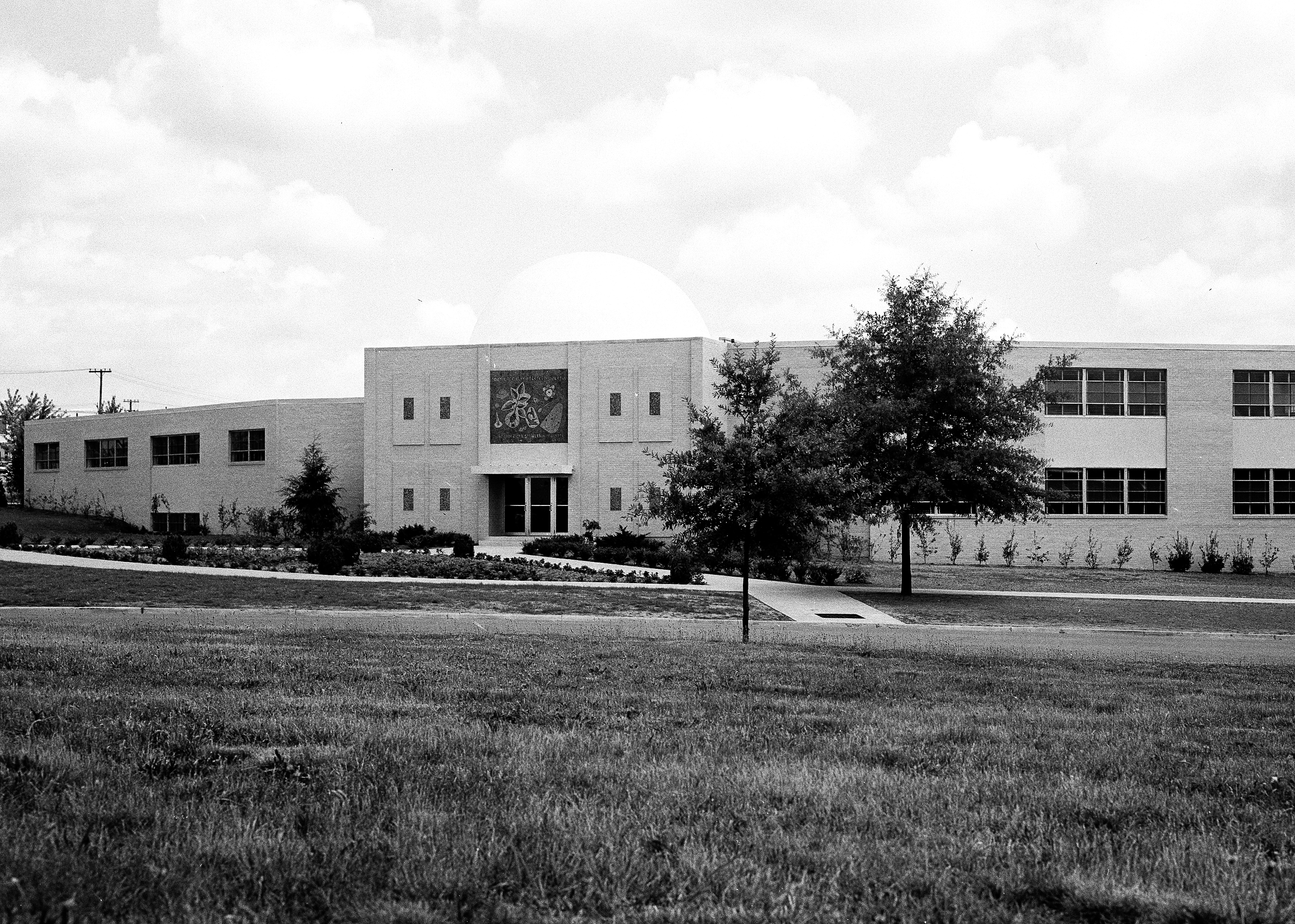 Ground was broken for the building October 1959 and upon completion dedicated at the baccalaureate service in May 1960. Equipment was relocated to the new building during the summer of 1960, and students occupied it that fall. Three wings spur from the planetarium dome in the center. On the left was the home economics wing, featuring a food laboratory with a demonstration kitchen and practice kitchens. Now, the food laboratory has been replaced by the culinary arts building. The mosaic on the front wall, which was completed in the fall of 1960, is also original to the building. The Class of 1960 gifted funds for the nine panels, and BJU art faculty designed and built them over the summer. The mosaic weighs 4,000 pounds and is made of 50,000 porcelain pieces.

The main panel above the door illustrates some of the courses taught in the building — chemistry, biology, astronomy and physics. It also includes a quote from Psalm 19:2, “Day unto day uttereth speech… night unto night showeth knowledge.” The eight smaller abstract mosaics, each one unique and cast in the ceramics lab, decorate the sides of the building.

As science programs grew and new programs were added, the science building became too small. Classes for fields such as electrical engineering, computer science and home economics were spread across campus. Some classes met in the Fine Arts Building; others met in the Alumni Building. Additionally, noise and traffic were an issue in the maxed-out science building.

By the fall of 1988, BJU announced the construction of an annex building. Construction began in May 1989 and was completed in the spring of 1990. The two-story, 13,000-square-foot annex was connected to the original building by a breezeway, which is the home of the Bruin 3 robotics car. The addition included three new labs: the interior decorating lab with drafting tables, a sample room and a new blueprint machine; a computer science lab to supplement the lab in the library; and an electronics lab to supplement an existing one.

In 1995 the main science building received its first upgrade since its construction. The labs, which were the focus of the renovation, were gutted and outfitted with new equipment, lighting, revised floor plans and principles of lab organization. Technology, carpet and paint were also updated.

In the summer of 2010, the science building was upgraded again to accommodate the growing number of students in science and technology majors. New laboratories were added, and classroom space was expanded.

Because the science building hosts classes for a number of diverse majors, many of its unrelated parts are pieced together to form the whole building. Two distinct areas contribute significantly to the building.

The 30-foot planetarium dome is the prominent feature of the Howell Memorial Science Building. Custom-built upholstered benches were installed to seat 90 people as they watched the images displayed by a projector. The side walls were decorated with photographs of the sun, moon, stars, nebulae and galaxies. Black-light murals painted by then art faculty member Darell Koons were also put on display, and along one wall stood a model of the Milky Way Galaxy and a real meteorite. When the science building was built, two public showings were held every Sunday at the planetarium. Arrangements could also be made for church and school groups, and freshman orientation classes visited the planetarium as well. Now only undergraduate students in an active research program use it for variable star astronomy and for imaging of nebulae and galaxies.

The cadaver lab was added during the 2010 upgrade to better prepare BJU students for medical school. Unlike students in many other schools’ undergraduate programs, BJU students can get hands-on practice in anatomy and physiology.

The lab is a restricted access room on the second floor of the center wing. Each year BJU receives a donor body from the Gift of Body program of the University of South Carolina School of Medicine. Students who participate in the lab sign an ethical agreement to respect the body and are not allowed to remove anything from the lab or take pictures.

The science building also hosts a cancer research lab. Each summer, students in a research program use the equipment to test theories on the treatment of cancer.

BJU also has a serpentarium for zoo and wildlife biology students. When faculty member Chris Carmichael came to BJU in 2012, he brought his collection of over 150 reptiles to campus to create the serpentarium. The students gain hands-on experience by helping Carmichael care for the reptiles.

Cell biology students in the cancer research lab have taken venom from the eight Gila monsters to isolate certain proteins that may target and destroy cancer cells. They then test these proteins in the lab and record their results.

Dedicatee and Other Contributors

The building is dedicated to Mrs. Lillian R. Howell (1875–1958) of Bridgeport, Connecticut. Little is known about her, and she had little contact with BJU. She only heard Dr. Bob Jones Sr.’s messages on the radio. Even though she never met anyone from BJU or visited the campus, she bequeathed the bulk of her estate to the University. Mr. and Mrs. Jack Shaw, friends of BJU, are also recognized by a plaque in the building for providing funds for the 1995 renovation of the public areas and hallways.

Charles E. Waterman of Auburn, Maine, donated the Waterman Bird Collection, which was completed before 1910. Almost 90 birds, representing about as many species and ranging from small sparrows to large owls, are displayed at the front entrance next to other taxidermies and preserved insects.

Another collection, the John J. Roder Coral Collection, extensively decorates parts of the first and second floors of the main building.