Levinson Hall, originally Grace Levinson Chapel, was part of the Student Center expansion that began in 1981. The newly named Edwards-Riley Memorial Student Center was completed the following summer and dedicated on September 11, 1982.

The Uses of Levinson Hall With painted angels on the curtains and an organ in the rear, Levinson Hall was meant to be a wedding chapel. However, its main use became to show BJU’s multi-image presentations, replacing the Rupp Room in the Founder’s Memorial Amphitorium. 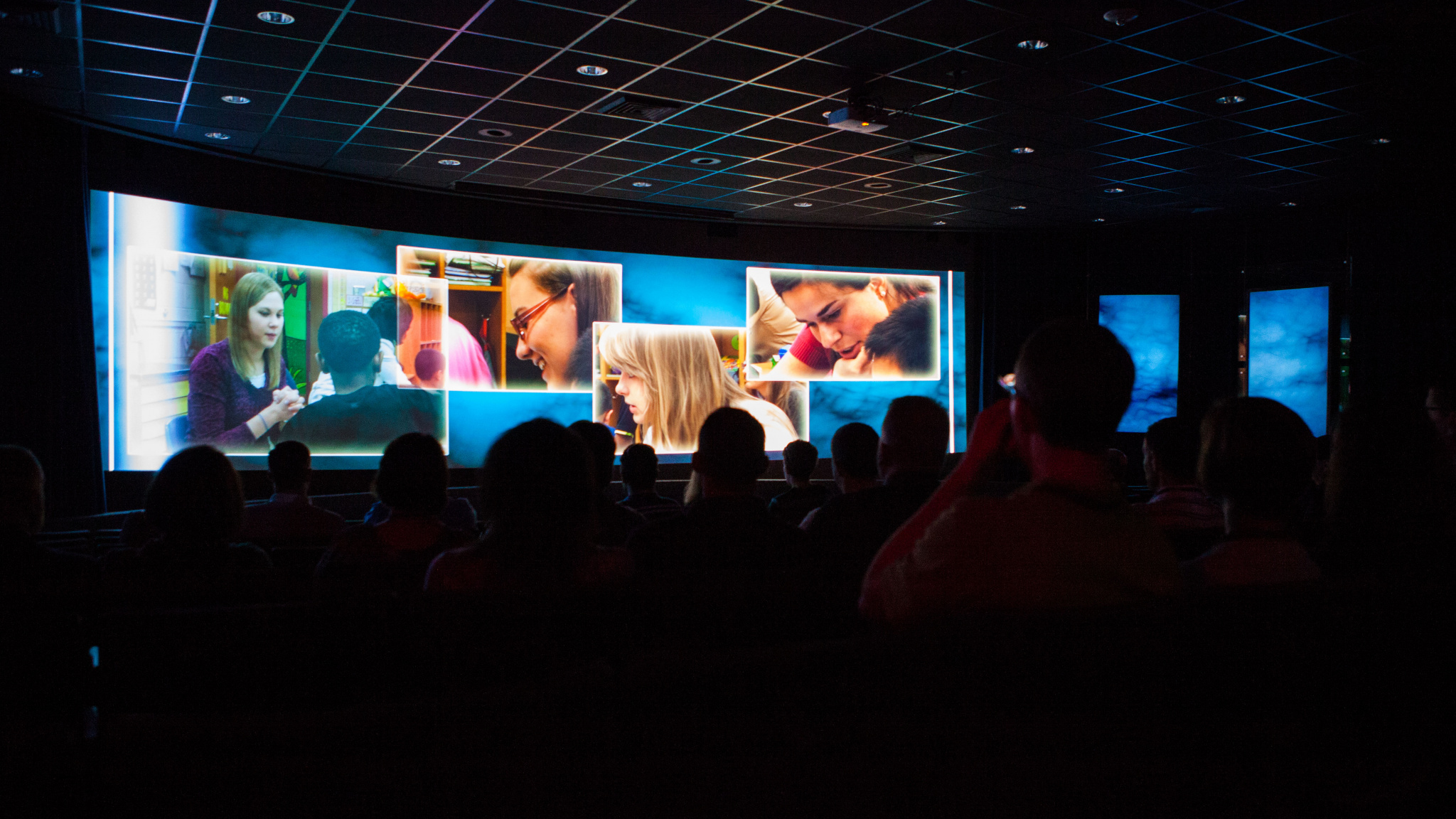 Multi-image presentations give students and visitors an overview of BJU, featuring at least a year’s worth of pictures. Lasting 35 minutes, the first presentation in 1974 used 25 slide projectors and a movie projector. The latest presentation from 2012 runs about 10 minutes, but the intent for both is what Steve Ross—a member of the BJU video team—calls a “jump-off point” for further interest in BJU.

In the mid-2000s, the organ was removed in order to expand the booth for more presentation equipment. Other improvements to Levinson Hall, including new seats and carpet, were part of the Student Center’s remodel in 2010.

Other uses of Levinson Hall have included overflows for classes, chapel or Bible Conference. It is also a place for special meetings. 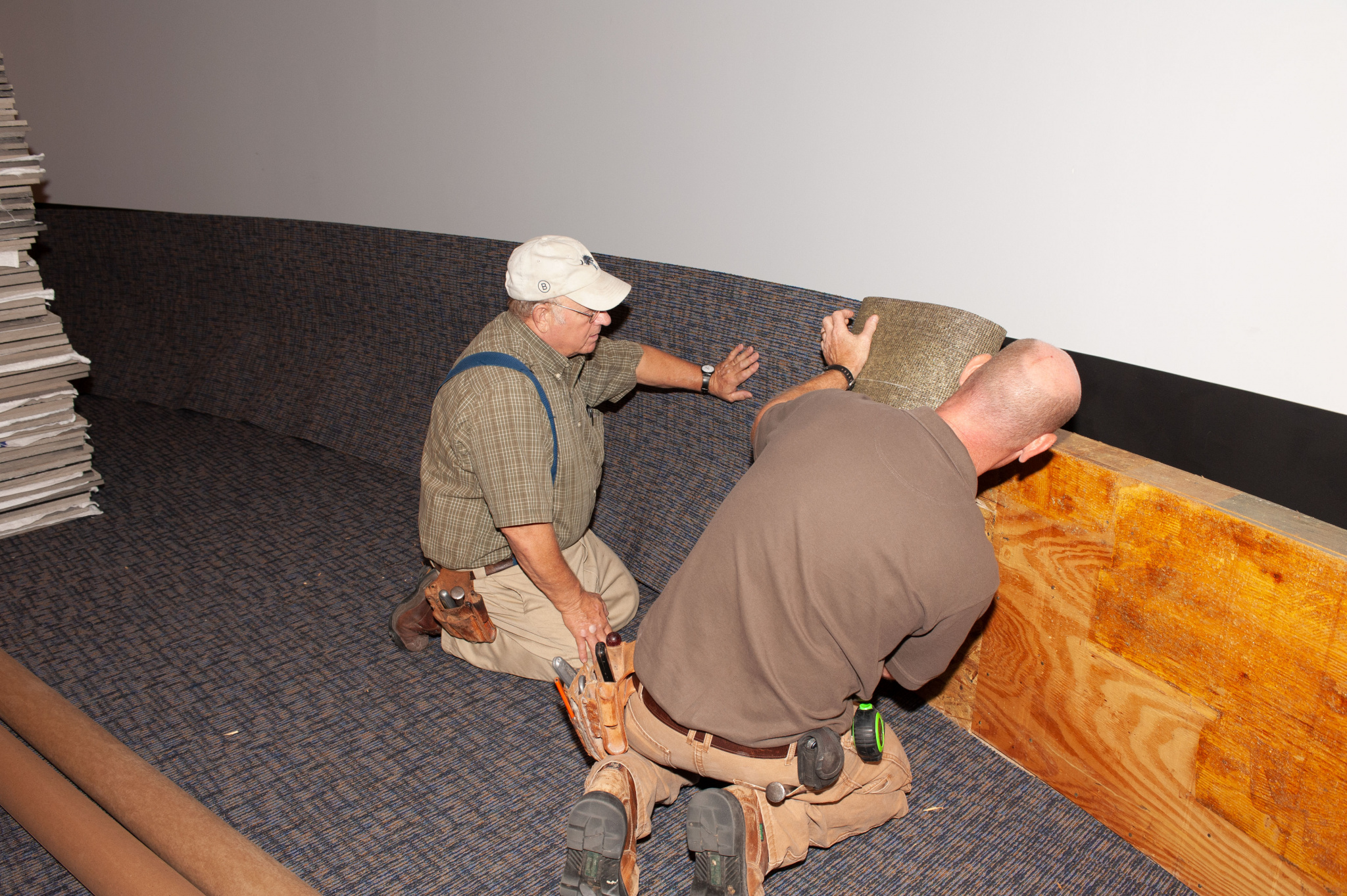 The Woman Behind the Name

Grace Isabel Rebecca Levinson was born in Buffalo, New York, in 1898. She spent much of her life in Chicago, a city where musical opportunities were at her fingertips. Although she loved to sing, Levinson began learning piano at a conservatory. This decision allowed her voice to mature while her musicianship grew. Dr. Gail Gingery—her student, friend and later colleague at BJU—wrote, “She thought her mother and her old teacher … conspired together to make her teaching a necessary therapy so she would get out of the apartment and recoup her physical mobility.” Regardless of the motive, her teacher asked the president of Chicago Musical College—now part of Roosevelt University—to invite Levinson to the college’s piano faculty.

Developing Her Talent in Chicago After Levinson began teaching at the college, she earned a bachelor of music in voice. She studied with notable artists, including Herbert Witherspoon, Franz Proschowsky, Oscar Seagle, Ada Paggi and Kurt Adler. Levinson then transitioned to teaching voice at the college.

Gingery said that although her accident affected her singing, she taught technique well. Renowned musician Rudolph Ganz—president of Chicago Musical College during Levinson’s tenure—also vouched for her abilities. A Voice of the Alumni article relates that he said “he considered her the most outstanding teacher of voice on his faculty.”

During her 10 years at the college, Levinson also took advantage of Chicago’s many other opportunities. She took private speech lessons with Arthur Phillips and earned a Bible degree at Moody Bible Institute, the first day student to do so.

Although Levinson was using her gifts well, Gingery wrote, “(She was) unhappy to be teaching the children of this world to (use) their God-given talents for their own glory. She began praying that the Lord would show her a better place of service.” Not long afterward, Dr. Bob Jones Jr.—at the recommendation of Bob Jones College faculty Ellen Herrmann, a pianist Levinson knew from Chicago—asked Levinson to be the head of the voice department at the college. Levinson joined the faculty at Bob Jones College in 1944. Her responsibilities included teaching advanced voice students and coaching for the University Opera Association and Oratorio Society.

Levinson continued to advance her own education—earning a master of arts in voice from BJU in 1951—in order to be able to better instruct her students.

Levinson published two works during her years at BJU, the first A Compendium of 1,000 Vocal Solos in 1951. She wrote that this reference volume was “to aid voice students (in enlarging) their vocal repertoire more intelligently and also to assist young teachers (in choosing) and (ordering) … selections for their students …” Along with the catalog information, Levinson included her personal comments about each solo.

She also wrote The Singing Artist in 1962, believing that “the purpose of all singing is to communicate faithfully and spontaneously to the listener the inner meaning of the song as expressed by the composer through the combination of words and music.” This 120-page textbook taught topics including posture, tone, interpretation and practice aids. For years, BJU’s voice department used this work as a basic vocal technique handbook.

Along with her earned degrees, she also received an honorary doctor of laws from Tennessee Temple University in 1965. After 30 years of service at BJU, Levinson retired in 1974. At the end of her life, she lived on the third floor of Barge with other retirees, but the BJU community did not forget her. Christa Gingery Habegger—former music faculty—remembers those years well: “We young … faculty members used to celebrate her birthday with a card shower and cake and ice cream.”

On May 17, 1988, just short of her 90th birthday, Levinson went to be with her Savior. Those whom she had impacted celebrated her life at a service in War Memorial Chapel. She lay in state in the chapel that bore her name before her burial in Chicago.

Levinson received national recognition for her teaching. In 1961, the National Association of Teachers of Singing named her a Fellow of the American Institute of Vocal Pedagogy. This recognition was for “her exceptional scholastic work in the field” and her “25 years of achievement in the teaching of singing.” She had been the president of the NATS South Carolina division. But more important than her ability to teach, Levinson was a woman of character. The 1970 Vintage remembered her for her “great physical vitality, determination, and dedication.” She was also “willing to coach her students when it meant a personal sacrifice” and “eager to take the time to explain the deepest spiritual significance of a song.”

BJU’s Alumni Association Executive Committee also gave Levinson the Alumni Appreciation Award in 1980. This award honored her for investing so much of her life in BJU and her students. That was her mission. Levinson taught,

“Since one’s overall philosophy has a way of shining through his singing, a great singer must, first of all, be a great person. To be a great person he needs to be properly related to God … and to his fellow man. He will continually strive for greatness of soul, evidenced by generosity, human kindness, and love for others.”

She was devoted and enthusiastic, humble and unselfish, and undoubtedly blunt. Gingery wrote upon her death, “Her whole goal in life had been to train Christians to use their lives and talents for the glory of the Lord Jesus Christ. Those of us who knew her believe she did just (that).”