The Dixon-McKenzie Dining Common has a long, complex history, starting with the first years of Bob Jones College.

A Progression of Buildings One of the original 18 buildings constructed on the current campus, the original dining common was what is now the Museum & Gallery. Everyone ate the same meal, and each meal was served family-style with assigned seating. Faculty ate with the students, serving as hosts and hostesses at the tables. Because the building’s seating capacity was only 1,500, students ate in two shifts, one for the University students and one for the Academy students. But as the student body grew through the ‘50s, the need for a larger dining facility became greater.

A History of the Current Dining Common 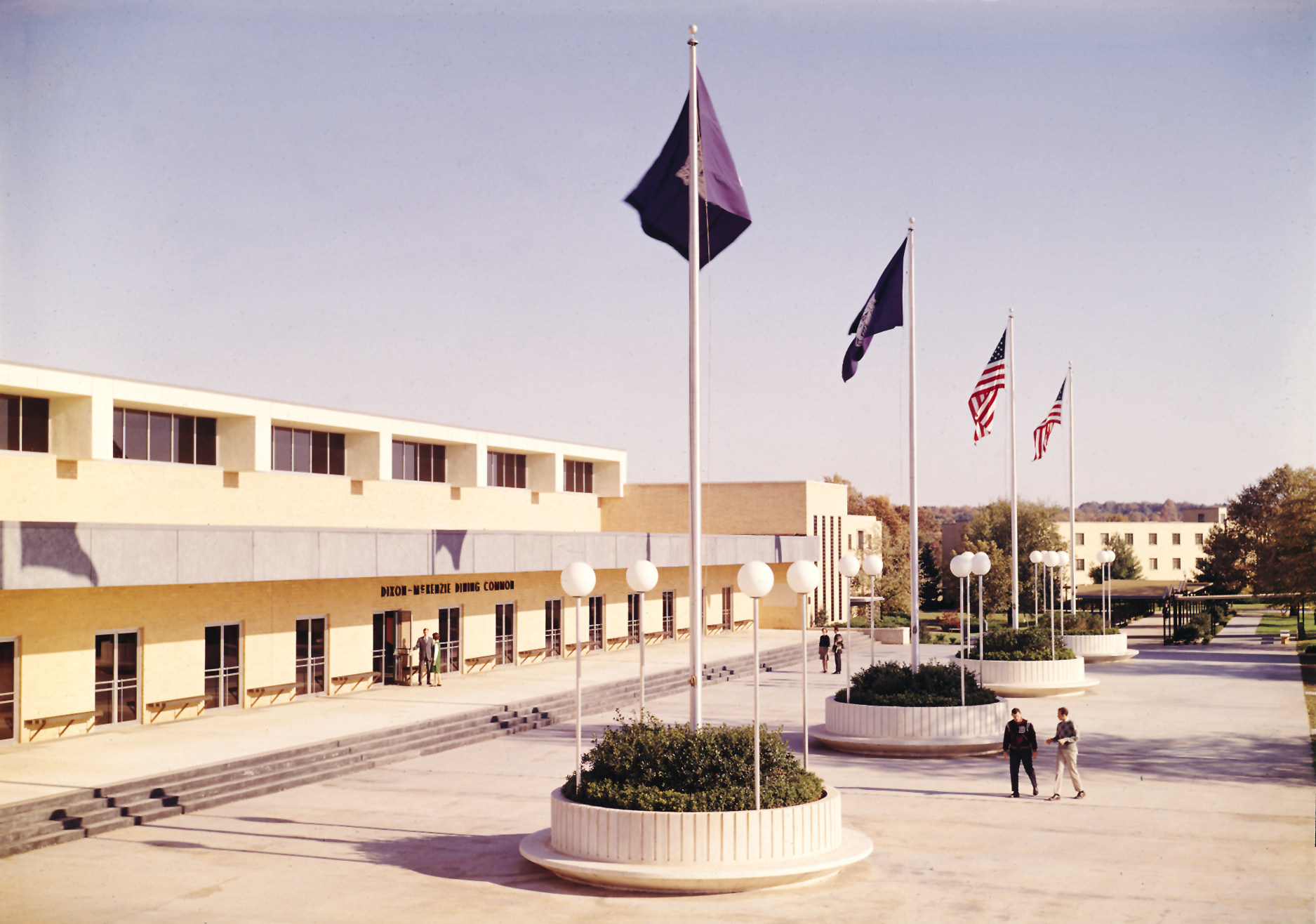 The current dining common began as a grocery store. In 1953, the University leased land to Dixie Home Stores, later renamed Winn-Dixie, to build an 11,000 square-foot building. As BJU’s student body grew, it became necessary to acquire the Winn-Dixie store to reconstruct nearly the entire building for use as a dining facility. In November 1964, Bob Jones Jr. used a napkin to sketch the new dining common, salvaging a portion of the old store as part of the kitchen. Fred Davis, then food service director, remembers that he bluntly told Jones, “That’s a lousy design for a dining common.” However, plans went forward, and Jones put Davis in charge of designing the kitchen. Davis made it as efficient as possible, such as placing the dishwashers at the front of the kitchen near the dining rooms.

Four rooms were constructed to add to the existing kitchen—the Varsity Room for students, the Family Room for faculty with young children, the Faculty (Red) Room for faculty with older children and the Administrative Dining (Blue) Room for the Jones family and their guests. Jones chose an orange and blue color scheme for the Varsity Room, and waiters and waitresses wore uniforms that matched. The new facility opened in September 1965. With the move to a larger building, and the need to meet the growing complexity of student work and class schedules, the family-style meals were reserved for evenings and Sunday dinners. Both still had assigned seating, which changed every six weeks. In 1987, only Sunday dinners were family-style. All other meals were cafeteria-style, and on Sundays, students could pick up a bagged lunch for supper if they did not eat out. A few years later a salad and sandwich bar was added along with drink stations at both ends of the dining common.

Another significant change to the dining system was the introduction of Grab ‘n Go breakfasts in 2000. This option included a bagel or muffin, fruit and coffee, milk or juice.

The dining common has also seen changes in management. The facility used to employ 450 staff and students. However, in 2012 the University contracted with Aramark to outsource the dining services. This change gives students more time for a meal and more food options.

Today, a variety of meals are served at stations. The dining common offers an American grill, comfort food, an international grill, salad bar and deli bar, to name a few. Meal options rotate within each station as well, and there is even a gluten-free section. For a quick lunch, students can visit the Grab n’ Go at the Davis Field House. There they assemble their choice of sandwich, fruit, chips, dessert and beverage.

As an attempt to cut back on rapidly rising food costs, in 1974 BJU bought 609 acres 18 miles from the school in order to raise beef cattle. In 1988, a dairy became part of the farm, providing BJU with milk, cream, buttermilk and even ice cream. Students in the pre-veterinary and agroeconomics programs also used the farm for classes when those programs were offered. When the farm was not profitable enough to help BJU break even, it was sold in 2000. The building itself has seen structural changes as well. Since its construction in 1965, the facility changed little until the interior underwent renovations in 1991. The Varsity Room had its original wallpaper replaced, chairs reupholstered, ceiling painted and new carpet installed. The Blue Room, which was the University president’s dining room, received similar updates.

In 2000, with the help of Bible Conference offering funds, the exterior received an upgrade—a new plaza. White concrete squares—well-known for blinding students on a sunny day—replaced the old plaza. Four flags in large planter-boxes that also functioned as benches were exchanged for a clock tower and a fountain, which was later filled in with plants.

In 2013, the Varsity Room was renovated and renamed the Kalmbach Room. The cafe-style seating arrangement fills the space around two island-like food stations. Seating capacity is now just over 1,100.

New Uses for the Other Dining Common Rooms

The Family Room retained its original purpose for many years. Occasionally it hosted other events, such as Friday night Papa Jones pizza in the 2000s. In 2015, the room became a place for meetings, conference exhibits, banquets and other similar events. To mark this transition, the room became the Davis Room. So why the names Dixon and McKenzie? As seen by the naming of the auditorium in Florida, its “dedicatees”—Mr. and Mrs. R. L. McKenzie and Miss Mary Lizzie Dixon—were involved with the school’s beginning. Born in Macon County, Georgia, in 1870, Robert Lee McKenzie was a businessman and real estate broker in the Florida Panhandle. He was also a politician, serving as Panama City’s first mayor in 1909 and a representative in the Florida House of Representatives.

Most importantly though, he was a friend of Bob Jones, who naturally turned to McKenzie for help when he wanted to start Bob Jones College in Florida. On short notice—due to Jones’ decision to begin a school—McKenzie assisted Jones in deciding where the school should be located. Because of his help, Jones placed McKenzie on the school’s first Board of Trustees. In 1932, McKenzie also served on the college’s executive committee.

McKenzie’s wife was also influential to the school. After his first wife Belle died, McKenzie married Blandford Dixon. Born in 1893, she was a local school teacher before she married. She and her sister Mary Elizabeth Dixon planted flowers and shrubs on the Florida campus in 1932. Students thanked them for their service with many handwritten letters. Fred Davis, a New York native, came to Bob Jones Academy as a high school senior in 1947. He grew up in church, but his first night as a student, he accepted Christ as his Savior after hearing Bob Jones preach an evangelistic message. That same year, Davis started working in the serving line in the dining common. In 1954, he graduated from BJU with a bachelor’s degree in Bible. He continued to work there as the kitchen manager until he completed his master’s degree in Bible in 1956.

R.K. Johnson, then BJU’s business manager, asked Davis to stay on full time after his graduation as the first food service director. Along with working this position, Davis co-pastored a mission church in the area. But during his 45 years at the dining common, he considered it just as much a ministry as the church. The 1978 yearbook, which was dedicated to Davis, says:

His life exemplifies a genuine concern for people. As Director of Food Services he comes in contact every day with salesmen and firm representatives from all over the country. Believing as he does that a Christian should also be a soulwinner, he takes every opportunity to witness to these men. He is conscious of the part he has in molding the character of the hundreds of students who work under him.

Davis said: “If you get into this type of work, if you’re satisfied that it’s what the Lord wants you to do, you’ll be happy with it and you’ll be enthusiastic about it.”

His son, Tim Davis, graduated from BJU with a Bible degree in 1976. In January 1978, he succeeded his father as the dining common’s food service director when Davis worked for ancillary services. He worked in that position for 34 years until Aramark took over in 2012.

Unlike the other dedicatees, Milton and Ruth Kalmbach were not directly connected to BJU, but they were supportive of BJU and its values. In 1963, they founded Kalmbach Feeds Inc., an animal feed production and distribution company that is still in business. They passed away several years before the student dining room was renamed in their honor. However, their son, Paul Kalmbach, said, “They would be most pleased to know their legacy includes supporting a university whose goals match the faith for which they lived.”