In 1998, BJU’s Living Gallery amazed the people of Greenville County for the first time. Since then, the sacred living pictures—known as tableaux vivants—have become a South Carolina Upstate Easter tradition. Whether for the art or for the message it brings, the stories told in Living Gallery have captivated about 250,000 people from all over the country.

With seven performances April 18–20 of Living Gallery presents  “Somewhere Forever,” the event will celebrate its 22nd anniversary. In those two decades, Living Gallery has impacted many. (Tickets are still available for purchase online or by calling (864) 770-1372.)

Living Gallery is the biggest outreach program in the history of the University. Dr. Darren Lawson, dean of the School of Fine Arts and Communication, is always surprised by the increasing number of new visitors.

“I keep thinking we’re going to saturate the market and people are going to be like, ‘Ugh, Living Gallery. Been there, done that.’ But it hasn’t happened in 22 years.”

About 7,000 people attend the event for the first time every year, creating new relationships in the Upstate and across the country.

Earlier this week, 250 people attending the Greenville Christian Meetings & Conventions Association (CMCA) visited BJU. After dinner and a tour of the campus, the group attended the Living Gallery SMART performance. Many of them arrived on campus knowing nothing about the University but left in awe of its work.

Amber Waters-Porter of West Philadelphia said the production was “absolutely captivating” and she was moved by the simplicity of the Gospel presentation. “As I was sitting there watching I was wondering, ‘Can we do a bus trip down here to see this in the future?’ ”

Brenda Miller-Chambliss of the Embassy Media Group said, “If anyone comes to this performance and doesn’t know the Lord, they’re not going to leave without knowing Him.” Her first time hearing about and visiting BJU, Miller-Chambliss enjoyed both the performance and the University’s focus on ministry. “Whatever area you’re going into, that’s still your ministry. Whether it’s in a ministerial position or in the marketplace, Bob Jones University will prepare you for where you’re going.”

Greenville County and the city of Greenville consider the program a major draw to the Upstate and collaborate financially to help promote the event. The event attracts attendance from the Upstate, making up 79.9% of the annual audience.

Greenvillians are still the biggest Living Gallery supporters. In addition to enjoying the production, members of the county love to give back to the community by being in the performances. In recent years, Lawson has made open calls for local alumni and friends to participate.

“We’ve kind of opened up in years past to say, ‘Hey! Come and be a part of this.’ ” From police officers to high school students, community members get involved, some even having a regular role every year.

Another way in which the community has joined the event is through art. While the event traditionally focuses on classic sacred works, pieces by local artists such as Doug Young and Jon Andrews have been added to the Living Gallery collection over the years.

Stephen and Cathy Lawton, Greenville residents involved in church music and music education, haven’t missed a Living Gallery since 2005. As part of their Holy Week observance, they take around 20 senior adults from their church to watch the production.

After years of hearing, and sometimes participating, in a constant stream of criticism about BJU, the Lawtons were impressed by the production. “I grew to know and love the musicians and artists as individuals. Sweet Christian folks,” said Mr. Lawton. “I began to see the whole institution in a new light, as a community of faith, committed to excellence in all things, and devoted to making Christ known.”

They’ve enjoyed every single one of the 14 performances they’ve attended. “It’s never the same. It never disappoints. It’s more than just world-class tableau vivant, it is a beautiful carrier for a message that is eternal,” said Mr. Lawton. The quality of the choral music, drama and acting, always bring them back for more. “There is never a vacant seat, and rarely a dry eye; the community attends, and even some unchurched folk who just love fine art.”

Jeffrey Stegall—theatre arts faculty and principal costume and scene designer—is directing Living Gallery for the fifth time. While he prepared for the first Living Gallery back in 1998, Stegall worked as an adjunct professor for another university. He invited his students to the event and one brought her boyfriend, who grew up in a Christian household.

At the end of the performance, the young woman was moved by the play. She cried to her boyfriend, “You knew all of this. Why didn’t you tell me?” The next day, the couple went to church and were reconciled to God.

This testimony inspired Kim Stegall—Jeffrey’s wife and dramaturg of the Greenville Shakespeare Company—14 years later while she wrote “Somewhere Forever.” The character of Lizzy was based on the students’ story. When the play was first performed in 2012, that same character inspired a BJU student to examine her life and turn to Christ.

Columbia, South Carolina, native Christian Thee is a visual artist and set designer who has attended Living Gallery since 2003.

While living in New York for 25 years, he worked under Jo Mielziner, the most successful set designer of Broadway’s Golden Era. When he moved back to Columbia, Thee struggled to find theatre with quality comparable to that of New York. But watching the 2003 Living Gallery delighted him.

“I hold very dear to me the productions they do at (BJU) because it restores my faith in that there’s such thing as good theatre in South Carolina,” he said.

Since then, anytime he meets a Columbian who enjoys good theatre, Thee introduces them to a BJU performance. As always, he will be attending this year’s production, and he plans to bring the former Cultural Council president of Columbia.

“I think Living Gallery is almost like a magic show. It’s amazing what they’ve accomplished with lighting. I’ve never seen a Broadway show lit any better than the work at Bob Jones University,” he said.

For 22 years Living Gallery has touched hearts and changed minds. But its biggest virtue is the way the performance honors Christ’s sacrifice. As Stephen Lawton said, in Living Gallery “the meaning and purpose of the Cross of Calvary is always central—visually, musically, dramatically.” 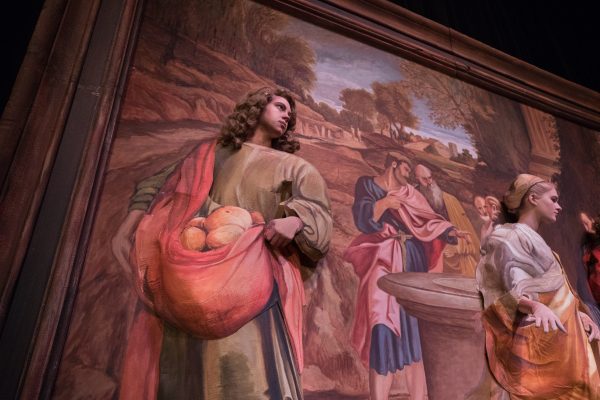