Joined by four other guest artists, Christopher Johnstone and Glenn Seven Allen play the lead roles of Charles Darnay and Sydney Carton, respectively, in BJU’s production of A Tale of Two Cities. Live performances of the musical will be staged at 7:30 p.m. on March 12–14. Streaming is also available beginning at 7:30 p.m. on March 12. For more details and to purchase access, visit bju.edu/twocities.

Don’t miss BJUtoday’s other behind-the-scenes content on the 2021 production of the musical A Tale of Two Cities.

Krystal Allweil (BJUtoday): Welcome to BJUtoday. I’m Krystal Allweil. Here at BJU, we are thrilled to present the musical A Tale of Two Cities after the COVID-19 pandemic restricted fine arts presentations for the last year.

So, Christopher, how does it feel to be performing again after a year of little to no performing at all?

Christopher Johnstone: You know, it feels like reuniting with a really good close friend or family member that you haven’t seen for a while. That’s what it feels like.

Allweil: Can you describe walking onstage for the first time?

Johnstone: You know, we’ve been so cooped up wherever we live and wherever we work, that we haven’t been in large spaces in a while unless we’ve been outside. So, stepping out on the stage, I forgot how big theaters and auditoriums are, so it was very exciting to be in such an epic space and be reminded of how awesome it feels to make a big sound in a big space for a lot of people.

Allweil: So, tell me about your character. I’ve heard some people call him a flat character who just never changes. He’s always good, always noble. Do you agree with that, you know, the description of him being flat?

Johnstone: Charles Darnay is not going to win the award for most colorfully provocative character, but he is incredibly important because he provides the counterpoint to the protagonist, Sydney Carton. We need to see what Sydney is trying to achieve, you know. So, I like to think that Charles is carrying the torch for integrity and being a gentleman and doing the right thing. And even if that means that we can figure out what he might do because he always does the right thing, it is important to see that contrast so that we can really see what this other man is really fighting for.

Allweil: So how do you play a character like that then, who doesn’t really change?

Johnstone: That’s a great question. I think the most important thing is to really dig into the humanity of the character. How do we see ourselves in that character? So, for me, my job is finding those moments where he isn’t someone who is always doing the right thing or the perfect person because, in a story, perfection is just boring, you know. So, for instance, even though he’s a very confident, well-educated, tall male in the story, for some reason he just cannot figure out how to propose to his beautiful, eventually wife, Lucie. He just really struggles with the fear of being rejected, and I think that is something we can all, you know, grasp on to.

Johnstone: You know, when we go to college or university and we graduate, there is no way, no matter what field you’re in, you’re going to know everything you need to know to be a success at that job or in that career. When I left university and had my first few jobs, I learned more in some of those first jobs than I did at school because it’s on-the-job training, you know? So, I am extremely proud of BJU for figuring out a model where they can bring another piece to the puzzle, you know, direct professionals and to basically give them the answers to the test. So, I think it’s brilliant that the students get to have that insider knowledge and fill in a few pieces of the puzzle.

Allweil: As far as I know, we’re one of the few universities who does this.

Johnstone:  Yes! And I think it’s so cool. You know, it’s a circle too. You have professors that have a couple decades under their belt that know certain things that maybe the professionals don’t know and then you have these young students. So, it’s nice to fill the gap and kind of create a circle of sharing and figuring out, like, what are we doing here and how do we figure out the most strategic, awesome way to do it?

Allweil: What advice do you have for the students who want to kind of follow in your footsteps and be where you are someday?

Johnstone: Well, that’s a great question. I had a professor once in undergrad who said, “You know, when I think about all the students that I’ve worked with throughout the years.” He said, “It wasn’t the most talented students that made it in the business — it was the hardest-working students.” And I’ve always remembered that. And I think it’s quite true.

Allweil: Thanks for taking the time to answer questions.

Johnstone: Hey, absolutely. This was fun.

Allweil: Welcome, Glenn, we’re glad you’re here as part of the cast of A Tale of Two Cities, and you’re playing Sydney Carton. But how does it feel to be on a stage again after little to no performing in the last year?

Glenn Seven Allen: It feels amazing. It was about a year ago that I was doing a full production of La bohème in Edmonton, Alberta, Canada, and because of the size of the house and because of what little we knew about Covid, we were actually, as far as I know, the last full stage production that was going on in the continent of North America. And then a day later I got on a plane to New York City, and then suddenly I was living in a pandemic. And two weeks later, unfortunately, I caught coronavirus. So my life changed very dramatically in a very short period of time.

I’ve had the opportunity to perform more than most in 2020 due to some really smart producing and programming as far as social distancing is concerned, but yes, it is definitely my first full production back. I just feel like a fish in water. I feel like I’m home again. I’m really grateful to be here.

Allweil: So, tell me a little bit about your character. Sydney Carton, he’s a pretty conflicted guy. Tell me about him.

Allen: All human beings have the ability to live a very dark life or a very bright life. You can live in the light or in the shadows, and he’s stuck, I think, with one foot in kind of both worlds. And I can definitely identify with that as someone who strives to be my best self on a daily basis but haven’t always been my best self in my life. And I appreciate that he has the opportunity for redemption, and that’s definitely how I feel about where I am at in my life. I just want to use my powers for good, as best I can, as long as I get the opportunity to be on this planet.

Allweil: So, you also teach at Yale School of Drama. So how are you taking what you do there and applying it to what you are doing as you perform alongside the BJU students?

Allen: That’s a really good question. And I think for me, I just need to walk the talk. I need to demonstrate in my process onstage and in rehearsal all the things I’m trying to teach and instill in my students at Yale University about collaboration, about preparation, and really, really trusting your talent, and trusting the people onstage with you to allow for truthful moments to happen and not try to preplan too many things. And even more importantly for me, I’m really passionate about the intersection of storytelling and song. So, being in a musical is a great way to prove that when the singing starts the acting doesn’t stop. In fact, I think that the integration of acting technique and vocal technique really can transcend the medium and of course, that is what I am trying to do here on a daily basis as well.

Allweil: What advice would you have for students who want to be where you are someday, who want to get to the big stage?

Allen: First of all, you have to be resilient. Rule Number One is you can’t quit. And Rule Number Two is you have to get better. And if you do that and also have a vision for your career that maybe spans 50 years instead of five, 10, 20 years, you might be a little more patient and embrace the process. You really have to embrace what you can control and don’t worry so much about what you can’t. Don’t compare yourself with other people. If you are comparing yourselves to other people and their careers, maybe use that as an inspiration or as sort of like a template, but if it makes you feel bad about yourself, or where you are in your career or your process, it’s not going to be productive for you.

Allweil: What has been your favorite part of being in this production so far?

Allen: People here are just so welcoming. I couldn’t have asked for a more considerate and welcoming environment, so I’m just really grateful for that. It’s not always the case in this business, so gratitude is number one.

Allweil: All right, well, thank you for taking the time to share your thoughts and your advice for students and for being here today. I look forward to seeing the show.

We hope you can join us for the stream of A Tale of Two Cities beginning at 7:30 p.m. on March 12. Access is available at bju.edu/twocities.

Patrick Dunn: Hey, I’m here. I heard you were having some interviews for BJU’s upcoming musical production of A Tale of Two Cities in which I’m one of the guest artists, you know, so I figured you’d want to ask me a question?

Dunn: No. I mean, it’s my third musical at BJU, you know, Little Women, Titanic, A Tale of Two Cities — no questions?

Dunn: No, OK. I mean, third time is a charm — I come back and do another show, I’ll probably have to start paying tuition. So, figuring you want to ask me questions.

Allweil: Uh, sure. When are you going to cut the man bun off? 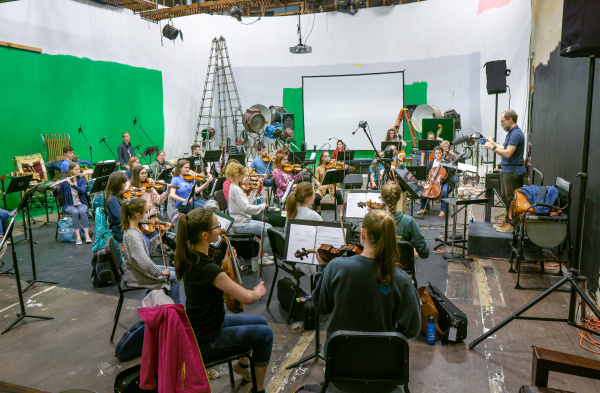 Creative Spaces: Orchestra Moves Out of the Pit The Best and the Worst of Times in Writing a Musical