Global events mean nothing unless people feel personally affected. But when something significant happens to their country, hometown or family, everyone feels equally vulnerable. It is particularly difficult for international students at BJU and other universities to deal with domestic unrest at home.

Every year during the Australian summer, the country goes through a fire season. But in June 2019 after a three-year drought, uncontrolled fires spread across the eastern states. The fires were finally contained in mid-February 2020, but the disaster took 33 human lives and those of countless wildlife. The flames were later exchanged for torrential rain and flash floods, which turned the ashes into mudslides that swept away many homes.

Freshman Biology major Sean Kwok was burdened for his home as he left Australia for Greenville in January. “During this time of hearing about some of these things on the news or from my family I felt fear and anxiety,” said Kwok. “I was afraid that the fires would reach my family and friends or reach our home.”

But Kwok found comfort through his family, prayer and relying on God. He kept regular contact with those at home and said, “I trusted that God had my family and friends in His hands and that He would take care of them.” He added that “in this sort of situation really the best thing we can do is pray. Like we learned in Bible Conference, God is the God of all comfort.”

Chinese students share similar angst as they follow the coronavirus news from home. The COVID-19 outbreak began in 2019 in Wuhan, China, and it escalated quickly. Several cities were quarantined, flights were canceled, and two new hospitals were built in record time. Still, coronavirus cases sprang up in other cities in Asia, Europe and the United States. In January 2020, facing the deaths of thousands of people, the World Health Organization declared COVID-19 a public health emergency of international concern.

As the disease continues to spread around China and has become a global event, students feel fear and frustration.

“I felt very bad that I could not be with my family when I realized that the problem was getting serious,” said senior Health Sciences major Windy Wu from China. Her parents have restructured their daily schedules to stay away from the city. “Since people were limited on going into public places, my mom got an extra week of rest, and my grandma could not go to play table tennis with her friends. My dad tried to work at home,” said Wu. Another student who wishes to remain anonymous remarked that “Since the coronavirus is so serious, I’m not only thinking about my family but also the other people around the world. I know some students keep reading the news and updates and they’re concerned.”

She knows that if it weren’t for her trust in God “I’d be very worried and depressed because it’s really serious, people are dying and there’s a lot of things that are going on in China. … Without God, I just can’t handle it.” Despite the uncertainty, she finds comfort in the promise found in Romans 8:28. “I think as Christians we have to just believe in Him and trust Him. We don’t need to be worried. We need to trust God.”

Haiti is often in political turmoil. The most recent protests, however, have been organized by police officers in reaction to low pay and poor working conditions. According to Haitian BJU student Alexandra Pierre-Pierre, “In recent months, there has been an increase in kidnapping, at least in the metropolitan area. Last year, school and work were interrupted for weeks (even months) because of protesters calling for the President to resign.”

Pierre-Pierre said that “being away from home during hard times makes me feel very removed, like I am loosing my Haitian-ness.” Though her family is affected, they have been able to stay safe and adapt. “In general, I feel very overwhelmed and powerless,” she said. “I love my country and wish that I could solve all the problems. I sometimes feel panic and anxiety, but then I remember that God is Sovereign.”

Lyndie Coulanges, another BJU student from Haiti, said she deals with the stress of being away from home during this crisis by praying, singing and meditating on God’s Word. She, too, is comforted by God’s sovereignty. “It is not unfortunate that we were born in a country with such problems all the time,” she said. “We are not unlucky. I think God is just writing history. That no matter where we (are) from, God has good and great plans for us.”

Political tension simmered in the Dominican Republic—my home country—for many years, but it spilled over when elections were suspended on Feb. 16. Four hours into the elections, the electoral board chose to cancel elections nationwide because of a glitch in part of the new $19 million automated voting system. Since that Sunday, Dominicans inland and all around the world have taken to the streets protesting for transparency and justice.

To celebrate both the 12th consecutive day of protests and their 176th year of independence, Dominicans organized a one-million-people apolitical demonstration in front of the capital’s electoral board building.

I experienced both impotence and pride as I saw the events unfold. For decades, the constant corruption of our politicians and the impunity with which they are rewarded has frustrated me and my fellow citizens. We worried that a dictatorship was looming behind these acts. But I was proud to see the way my people finally stood up to injustice.

The Dominicans’ resilience and determination to fight for their rights encourages me. Even our national symbols inspire me to look forward. The Dominican flag has a Bible on its coat of arms open to John 8:32: “And ye shall know the truth, and the truth shall make you free.” Whether we get the justice we’re searching for or not, I pray that the Lord will guard those protesting and that they will come to know the truth of which this verse speaks. Christ is the truth.

Disassociating ourselves from global events is easy, but the Lord calls us to comfort one another. Be aware of current events and how they may be affecting the people around you. “We can best sympathize with what we understand,” said Mark Vowels, director of the Center for Global Opportunities. Vowels, who teaches Bible and culture-related courses, urges American students to be mindful of global events. Reading articles or listening to podcasts by international news sources can raise awareness.

Even when well-informed, sympathizing can be hard. Put yourself in others’ shoes. “Sympathy requires a certain level of understanding, whereas empathy requires only an imagination,” said Vowels. He tells American students “don’t let your international friends cut themselves off. Don’t believe them when they say that everything is okay. Push them in love to talk with you. Let them know that you probably will not fully understand, but you promise to care and to pray.”

Most importantly, love the people around you. “Once students become aware of geopolitical issues around the world that impact their peers from other countries, they can offer words of encouragement with Scripture, they can pray with and for the students, and they can simply ask how their family members are doing in their home country in light of whatever issue(s) they are facing,” said Dr. Matthew Weathers, director of international student relations.

Trust in the God of all comfort. In Him, we find peace that surpasses all understanding. Weathers encourages both international and American students facing struggles “to ask God for strength and grace each day. His Word promises that there is sufficient grace for each day, and we can rest in that promise of God even when the future is uncertain at home.” 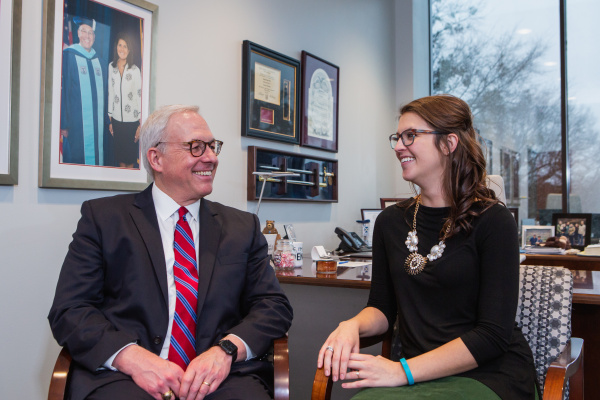