With a history of Cherokees, railways, textile mills and agriculture, Greer has been a thriving upstate community for hundreds of years. More recently, highways, the Greenville-Spartanburg Airport and the BMW plant have made Greer one of South Carolina’s fastest-growing cities. Amidst the growth and new places, Greer also prides itself on historical sights and establishments that people can enjoy today.

(Be aware that Greer is improving its streets and infrastructure at Historic Greer Station in downtown Greer where some locations are.)

Built in 1913 for Piedmont and Northern Railway, the Greer Depot is one of three depots still standing in Greer. And it is also the only two-story Piedmont and Northern Railroad depot still existing. Consequently, it was listed in the National Register of Historic Places in 1987. The two-story wing was a passenger station, and the one-story wing was a freight warehouse for the railway. Additionally, the upper level of the station functioned as Greer City Hall until the late 1930s and stored city records until the 1950s.

Piedmont & Northern Railway merged with Seaboard Coast Line in 1969. However, by 1980 the line abandoned the depot and decided to demolish the dilapidated structure. Upon hearing of those plans, Greenville County Redevelopment Authority bought the building. In 1986, a partnership bought the building from the GCRA to convert it into a strip mall with space for at least five businesses.

Although improved from its abandoned state, the depot still was not what it once was. In June 2017, Letchworth Properties — part of Western Carolina Railway — bought the depot, and CEO and President Steven Hawkins began to implement his renovation plans.

First, they removed the trees alongside the depot in November 2017. Planted in 1987 to make the depot more aesthetic, they were actually damaging the building, its foundation and the sewer lines.

In 2019 a private garden and patio area was constructed along the depot next to Trade Street. Hawkins named it the Marlene Faye Holdsworth Hawkins Historic Greer Depot Memorial Rose Garden for his mother, who loved roses.

Currently, the leaky terra cotta tile roof — the depot’s first and only roof — is being replaced with identical tiles. Its completion is anticipated this summer.

The interior is also being renovated. The first floor will become a 3,500-square-foot event venue and meeting space with room for almost 300 people. The Greenville Journal said, “The venue will feature 20-foot ceilings, modern restrooms and a catering preparation area. The depot’s remaining space will house the offices of Western Carolina Railway Service and its subsidiaries.” The second floor will house the headquarters, or at least office space, for Western Carolina Railway Service Corp. Period correct lighting will be installed inside and outside the building.

Additionally, a business that was operating in part of the strip mall will remain at the depot. If you want to learn about local history, there is no better place than the Greer Heritage Museum. With interactive and intriguing displays, the museum has something that will catch anyone’s attention. An article from Discover South Carolina said, “(Artifacts include) a coffin-shaped wicker basket once used by Wood Mortuary to transport corpses, a collection of ladies’ hats from the 1930s to present, an old optometrist’s cabinet from Kirkwood’s Optometry, and a dollhouse replica of Hammett House in Taylors.” The museum even has a jar of peanut butter from 1936.

The museum also features a library and a presentation room for short documentaries.

Built in 1935, the museum building was originally the Greer Post Office until 1964. From 1968–2008, it was Greer City Hall. Then it was renovated as the museum. The building features its original terrazzo floor, old bulletin boards and a 1940 mural in the lobby. It was listed in the National Register of Historic Places in 2011.

The museum is open Friday and Saturday from 10 a.m.–4 p.m. Admission is free, but donations are appreciated. If you are familiar with back roads in the Greenville area, you might have traveled on Suber Road or Suber Mill Road. These roads derive their names from Suber’s Corn Mill, one of the few water-powered mills still operating in the state. Behind the white buildings sloped along the road, the water wheel turns, powering the gears, pulleys and shafts that make the millstones grind the corn. Afterward, the fresh grits, cornmeal and animal feed are bagged and sold at the mill.

The Suber family has invested in the area for over 150 years. A historical marker on the site reads, “Four generations of the Suber family have owned and operated a water-powered grist mill on Princess Creek, a branch of the Enoree River, since shortly after the Civil War. James A. Suber (1826–1923) ran a sawmill and whiskey still a short distance upstream before serving in the Confederate army and added a grist mill at that site soon after he returned to Greenville County. …

Although it is technically in Landrum, South Carolina, Campbell’s Covered Bridge still makes the list of must-see places in Greer. Listed in the National Register in 2009, the only covered bridge left in South Carolina is only 12 miles (a 20-minute drive) from downtown Greer. Charles Irwin Willis built the bridge across Beaverdam Creek in 1909 on the property of Alexander Lafayette Campbell, who owned a corn grist mill 50 feet downstream from the bridge. The bridge — 35 feet long and 12 feet wide — features truss construction, a significant engineering design. The National Register explains, “This method of truss construction absorbs and transfers a passing vehicle’s weight to the rock abutments on each end of the bridge.”

Not only was its design significant but also its function. Without the bridge, travelers had to circumnavigate the creek, taking a whole day to travel 25 miles. But once the bridge was in place, the same trip took only an hour.

As an important historical site, the bridge was restored in 1964 and again in 1990. Today, it is part of a 17-acre park surrounded by trees. Greenspace and picnic tables and benches lining the creek provide the perfect setting for an enjoyable morning, afternoon or evening during any season. Signage in the park describes the history of the bridge and the surrounding area. Even though City Park has been part of Greer only since 2008, it has become a central gathering place for the Greer community.

At the front of its 12 acres, City Hall, the outdoor theater, and fountain plaza and gardens create a picturesque scene. The fountain sometimes coordinates its sprays with music. A playground with a large pavilion is located in the middle of the park. And at the back of the park, a pond — containing a peninsula with a gazebo — sits behind the Cannon Centre, formerly the Horace McKown Jr. Center.

There are sidewalk trails and greenspace throughout the park with a few swinging benches scattered along the trails. Parking is free.

The park hosts community events such as Freedom Blast, Food Truck Rollout, Moonlight Movies, the Annual Railfest, Artisan Makers Market and Greer Farmer’s Market, which is every Saturday end of May through October. You can find event dates and details on the city’s calendar.

Located along Highway 101, Lake Robinson has been part of Greer since 1985 after a dam was built on the South Tyger River to create water storage. Not only does it serve a practical purpose, but the 800-acre lake also invites people to enjoy recreational activities. There is a boat ramp and a fishing pier, and on shore, there are restrooms and a picnic area with two shelters. Enjoy a meal with friends, go out on the water, or catch a sunrise or sunset with the Blue Ridge Foothills in the background. However, be sure to check regulations for boating, fishing and other activities before you enjoy the simple pleasures of the lake.

There are many shops in Greer at Greer Station and around town, but one, in particular, has been an integral part of the city since it opened in 1916. Originally Smith & Vaughn, Smith & James offers a wide variety of high-end men’s clothing, from bathing suits to suits, representing a number of brands. A second store opened at The Shops of Greenridge in Greenville in 2005. This delicious dessert store is not native to Greer, but it offers a favorite summertime treat for hot South Carolina weather. (Though frozen desserts can and should be eaten year-round.) The 100-year-old recipe first sold at a stand at Charlotte Beach, New York, on Lake Ontario. From there, the family business has expanded. Franchises have opened in clusters in New York, Massachusetts, Florida and the Carolinas. Additionally, Virginia and Louisiana each have one store. Abbott’s Frozen Custard in Greer is the only one within a 50-mile radius of Greenville.

The fresh frozen custard comes in cones, cups, sundaes, splits, milkshakes, flurries and floats. You can even buy custard cakes and pies. Pick from a variety of classic and unique flavors.

Barista Alley has only been in Greer since March 2017, but it is already a BJU student favorite. Within its brick walls, concrete floor and high ceilings, you can find a variety of seating options throughout the open floor plan. Take your pick from comfy couches, tables and chairs, or the barstools along the front window wall. The atmosphere sets the mood for delicious coffee, crepes, teas, pastries, smoothies, smoothie bowls and acai bowls.

Their Instagram account says their hours are currently 7 a.m.–5 p.m. Monday through Saturday and 12 p.m.–5 p.m. on Sundays. However, according to their website, closing hours are normally extended to 10 p.m. each evening.

Barista Alley should sound familiar. It’s mentioned in the coffee edition of BJUtoday’s Around Greenville series.

Laurenda’s was founded in 1993 and moved to Greer almost 10 years ago. They pride themselves on their handmade classic southern entrees and sides, like fried chicken, country style steak and collard greens. Their website says, “We cook with our grandma’s recipes, and we’re known for having the best turkey and dressing, mac ‘n’ cheese and coconut cake in South Carolina.”

Not only do they operate a restaurant on weekdays and Sunday afternoons (with a separate Sunday menu), but they also serve the community by catering, especially for weddings.

Since 1930, Fishers Orchard has been growing and selling fresh peaches, produce and other farm-based products. Normally, the orchard at 650 Fisher Road even offers a pick-your-own option, but that is currently not available. The farm operates two other stands in Greer — Fishers Orchard at Dillard and the Historical Taylors Shed Farm Store. The store at Dillard is alongside the family-owned Dillard’s Ice Cream, so be sure to get a sweet treat when you visit that location.

Fishers Orchard and Dillard’s Ice Cream have both been mentioned in our Around Greenville series previously, too. Check out the article on you-pick orchards and the one on local ice cream parlors. 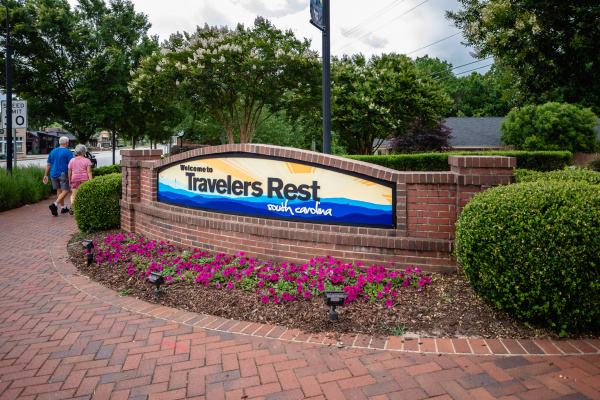