Photo by Will Crooks, used with permission

“I like to create things that are beautiful and that bring joy and that are happy, but a lot of them actually come from harder times,” said Katrina Piercy, the artist behind Meraki Pottery in Greenville, South Carolina.

The 2015 biblical counseling graduate from Australia has found her niche where drawing meets pottery and where art connects people. Her work includes a variety of functional yet intricate porcelain mugs, cheese boards, bowls and more with iconic blue designs — some flecked with gold, but all with stories to tell.

According to Piercy, Meraki is “a Greek word that means to put a piece of yourself in your work.” This term captures the idea of passionate, soulful artistry that instills one’s essence into something out of love. But Piercy didn’t begin with this focus. First, she had to understand who she was before she could leave a piece of herself in her art. Said Piercy: “As a kid, I was always drawing, so I thought I was going to go the route of graphic design.” In college, she started out as a graphic design student but discovered she didn’t enjoy creating digital forms. So she drew from her love of kids, switching her program to biblical counseling and working at the juvenile detention center for a few years.

It wasn’t until her senior year that Piercy took a pottery class on her husband’s whim and fell in love with the medium. She found that the process of creating at the wheel was both relaxing and purposeful. Piercy said, “Instead of just creating a drawing to hang, the idea of creating things that become a part of someone’s life and their everyday use, and even just the aspect of changing the things that I use every day into something more beautiful … really fascinated me.”

From Hobby to Business

After graduating she and her husband Stephen (‘12) lived in the apartments across from the University. “I was just making constantly, to the point (where) … I was hiding mugs under our couch, behind the bed. We were running out of storage, and Stephen was like, ‘You need to sell some of this or something.’ ” So she obtained her retail license and started an interim business called Bonzi Pottery that tapped inspiration from Asian influences.

But when the couple relocated to Virginia, Piercy left pottery altogether. She said, “I didn’t touch pottery for two years, but I kept thinking about it.” Her continual search for identity — a search that began when she lived as a missionary kid in Australia — focused her interests to shape her art. When Piercy and her husband returned to Greenville, she opened a new pottery business that reflected her own story.

Said Piercy: “One of the problems I had earlier (with Bonzi) was, I was a people pleaser. … When I started again, I just decided to sort of scratch all the voices and just create a piece of me and what I liked. And it was the idea that if it worked, great. And if not, that’s fine. It was just something I wanted to try and enjoy.” Meraki Pottery tied together Piercy’s interests in drawing and throwing pottery with her Australian heritage and gift of connecting with people. Through the things God was teaching her during that time in life, Piercy began by making mugs that reflected both her love of cultures (the city illustrations collection) and the beauty of her home country (the floral collection). She also loved creating and experimenting with new forms like paint palettes and vases that infuse artistry into the mundane elements of life.

“Creating and leaving a piece of myself,” said Piercy, “was just sort of a journey of taking the time to see myself through … Christ’s eyes. I think I had a view of myself and a view of God that was incorrect. So learning that I don’t have to fit a mold to be loved by Christ was really important to me.”

Connecting to the Community

This change in perspective has opened the door for Meraki to flourish and attract others to its beauty. Said Piercy: “Very little of what I do is art. A lot of what I do is interacting with people and building relationships and paying taxes.” Her training in counseling has allowed her to cultivate relationships with buyers, other creators and social media followers.

“I love getting to meet so many people from all walks of life. … It’s really, really cool to just make so many connections and meet people and share my story, but also hear how my work and my story translates to them.”

In fact, after witnessing the same kids cycling through the system at the juvenile detention center, Piercy’s vision for Meraki Pottery has extended beyond the physical elements of the art form. She said: “I always thought it’d be a great idea to create some sort of program outside of jail that would provide accountability, and maybe using art some way to entry and to grow and to give them experiences that they aren’t always able to get in their situations.”

By focusing her talents on her Christ-centered identity, Katrina Piercy has molded new life and purpose into her pottery. Said Piercy: “It’s one thing to create a simple, beautiful form. But to put meaning behind it and where that’s coming from, it’s the story, I guess, that’s leaving a part of myself.” 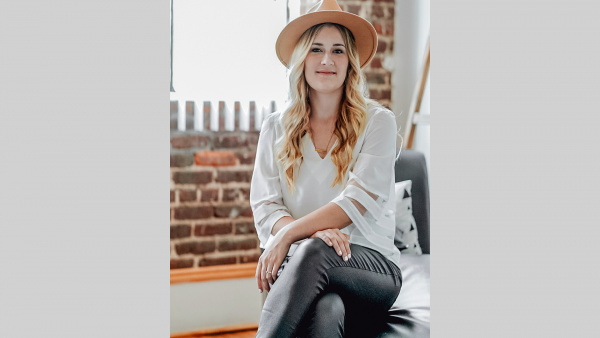