COLOSSIANS 3:5–10
Mortify therefore your members which are upon the earth; fornication, uncleanness, inordinate affection, evil concupiscence, and covetousness, which is idolatry: for which things’ sake the wrath of God cometh on the children of disobedience: in the which ye also walked some time, when ye lived in them. But now ye also put off all these; anger, wrath, malice, blasphemy, filthy communication out of your mouth. Lie not one to another, seeing that ye have put off the old man with his deeds; and have put on the new man, which is renewed in knowledge after the image of him that created him:

In his book God’s Words, J.I. Packer writes, “Our first need in life is to learn about sin. . . . If you have not learned about sin, you cannot understand yourself, or your fellow men, or the world you live in, or the Christian faith. And you will not be able to make head or tail of the Bible.”[1] He is right. Understanding sin is crucial in starting the Christian life and in continuing the Christian life.

Perhaps we do not have a clear view of sin because it is such a hideous picture. It is like a doctor showing his patient a photo of clogged arteries. We would prefer simply not to see what our diet choices are doing to our bodies. However, ignoring the facts does not make them go away. Similarly, the power of positive thinking is no match for a reality that God describes with words like disobedience, lawlessness, iniquity, wickedness, trespass, transgression, and rebellion. Some people suggest that the categories of good and evil do not even exist. But when we look around us, the terrible reality is undeniable.

The truth about sin is not only repulsive, it is also personal. It is easy to read the account of Adam and Eve in the garden and wonder how perfect people could be misled. But how many lies of the devil have we believed in the last week? The news regularly reports brutal, premeditated murders. But then again, professing believers whose anger is kindled toward brothers are “in danger of judgment” (Mat. 5:22). We read the account of David and Bathsheba and shake our heads in disapproval. But Jesus said that to look with lust is to commit adultery in the heart (Matt. 5:28). Sin is not other people’s problem. It is ours. “There is none righteous, no, not one” (Rom. 3:10).

Consequently, seeking things above has definite implications for dealing with sin below. That is why Paul moves from the importance of our affections to the necessity of understanding and overcoming our sin. This chapter examines Paul’s teaching about sin, while the following chapter focuses on overcoming it.

Seeking things above has definite implications for dealing with sin below.

COLOSSIANS 3:5
Mortify therefore your members which are upon the earth; fornication, uncleanness, inordinate affection, evil concupiscence, and covetousness,

Unsurprisingly, Paul first takes aim at immorality and greed. The Colossians did not face unique, uncommon battles. For one thing, Paul instructed them to pass this letter along to Laodicea. In addition, this letter has been circulating for nearly 2,000 years now. Instead, the apostle exposes the evil of sexual temptations because they lie near the heart of our adversary’s attack. If we want to experience growth in Christ, we have to draw some sober conclusions about moral purity.

Most of us are very aware of the onslaught of sensuality that barrages our eyes and minds every day. The devastating effects of our super-sexed society are evident across a range of issues, including pornography, divorce, abortion, births out of wedlock, sexual assault, and child abuse, to name only a few. But even though our contemporary context is very challenging, the problem isn’t fundamentally our godless culture or 21st-century technology. Jesus Himself said that what comes out of a person’s own heart is what defiles him (Mark 7:20–22).

Many reject conclusions like Paul’s and Jesus Christ’s, raising questions such as, “What is the big deal? If I’m not hurting anyone, why does it matter?” It matters because immoral sins are thoughts and actions that pervert one of God’s best gifts — sexuality. Sex was designed to be part of the marriage experience and to enhance the love of a husband and wife. Satan has taken this good gift and distorted it through self-centered corruption. He has turned love into lust. Paul catalogs these sexual sins in Colossians 3:5 and expects all believers to radically turn away from them.

Paul calls them “your members which are upon the earth” (3:5). He is not saying that our physical bodies are inherently evil. That demonic lie contradicts Scripture’s clear teaching (1 Tim. 4:3–4). After all, God created all of us and pronounced the entirety of His creation “very good” (Gen. 1:31). What does seem to be the problem is that people typically use their bodies to serve sin (Rom. 6:19). We think, “It’s my body, and I’ll do as I want to.” It is an earthly, man-centered mindset, rather than an eternal, God-centered one.

Where does idolatry fit in? A dissatisfied and greedy heart is fertile soil for the kinds of moral impurity that Paul lists first. Furthermore, false religion and immorality go together, not just in the ancient world of Canaan or Colossae. Think of the sexual liberty promoted by liberal churches. Think of the moral freedom demanded by contemporary atheism. Think of what is cherished on most college campuses — football, alcohol and free sex.  The mantra is: You’re free to hook up. This is the way the world “walks.” This is who we are outside of Christ (Col. 3:7). Heaven-focused, Christ-centered living pursues moral purity.

COLOSSIANS 3:8
But now ye also put off all these; anger, wrath, malice, blasphemy, filthy communication out of your mouth.

Paul proceeds to a second category, commanding us to confess the sins committed by our tongues. In Colossians 3:8–9, he focuses on verbal reactions that disrupt and damage interpersonal relationships within one’s family, church and society.

We use words so frequently and freely that we tend to underestimate their significance. It is convenient for us to section off our words as something separate from what we really are. Or we think of our tongues as committing “respectable sins.”[2] But the reality is that what we say and what we type has everything to do with who we are and what we really value in life. Sins of the mouth always reveal the state of one’s heart: “for out of the abundance of the heart the mouth speaketh” (Matt. 12:34).

The reality is that what we say and what we type has everything to do with who we are and what we really value in life.

Paul again lists a series of sins. The first three commonly lead to the last two. As you read these descriptions, think of the ways such sins contradict the message that Christ is our life.

Paul seems to single out one very obvious manifestation of corrupt communication among a community of believers: “Lie not one to another” (Col. 3:9). Notice the corporate aspect of this command. We have a responsibility to one another. Lying disrupts the intended unity of Christ’s body. It is destructive. “Fellowship is built on trust, and trust is built on truth.”[3] In other words, unity is a wonderful thing, but it cannot merely be tolerance of everyone and everything. It is centered on what is true because Christianity hinges on truth. Christ told Pilate that He came into the world to testify to the truth (John 18:36–37). He is “the Word” (1:1) and it is by His truth that we are set free (8:32). Therefore, by speaking the truth we build up one another (Eph. 4:29).

This imperative covers more accepted forms of deceit such as evasion and insinuation and exaggeration. Integrity and humility matter in communication, not as isolated virtues of a bygone era, but as weighty testimony to the trustworthy character of our Lord. Perhaps speech sins are not as notorious as sexual sins, but they can be just as destructive. Jesus’ half-brother James wrote, “And the tongue is a fire, a world of iniquity: so is the tongue among our members, that it defileth the whole body, and setteth on fire the course of nature; and it is set on fire of hell” (James 3:6). Living with an eternal, Christ-centered focus means viewing what we say exactly as God does.

COLOSSIANS 3:5–10
For which things’ sake the wrath of God cometh on the children of disobedience.

In order to understand what Paul teaches about sin, we must consider one more aspect of these verses. It is important to realize that Paul is not merely pointing out the social damage done by sexual and speech sins. Many unbelievers would agree that sexual misconduct and anger and lying can have disastrous effects. But as sobering as the horizontal implications are, Paul’s point is deeper. Fundamentally, there is a God (Eph. 4:6). He created us, and He is holy. And because He is holy, He must demonstrate wrath. This is not erratic, vindictive anger. It is God’s settled antagonism toward all that violates the righteousness and beauty and peace that He is and that He intends for us. God would not be good if He did not deal with evil.

Romans 1 tells us that His wrath is already revealed from heaven against our unrighteousness, which starts by sinners suppressing truth about Him. When we as sinners give way to idolatry, we set ourselves up for greed, and He gives us over to fulfill our lustful passions. He has already revealed wrath against this kind of living (Rom. 1:18). It “cometh on the children of disobedience” (Col. 3:6). And the final judgment of condemnation is imminent — it’s on the way — for those who refuse to repent. If we want to seek things above, we have to take a sobering look at sin in high definition. 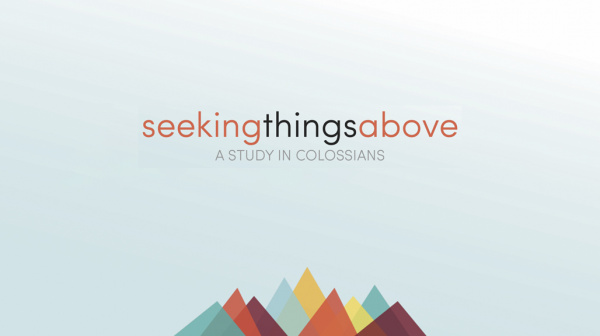