PHILIPPIANS 2:5–8
Let this mind be in you, which was also in Christ Jesus: Who, being in the form of God, thought it not robbery to be equal with God: but made himself of no reputation, and took upon him the form of a servant, and was made in the likeness of men: and being found in fashion as a man, he humbled himself, and became obedient unto death, even the death of the cross.

Philippians 2:5–11 is the high point of this section of Paul’s letter. In fact, it is one of the grandest and loftiest Christological passages in the entire Bible. These verses can be compared to an exquisite piece of jewelry — a beautiful diamond in a 24-carat gold setting. Many theologians have published rich theological volumes about this passage. Verses 6–11 follow a simple structure that dives downward and then soars upward. In verses 6–8, Paul describes the descent of Christ Jesus from the realms of divine glory to the humiliation of a criminal’s cross. In verses 9–11, Paul explains the ascent of Christ Jesus to an even more exalted status as the risen Lord. Very few passages in the New Testament depict the person and work of Christ in such descriptive, compelling language.

Yet their renown for rich theology can obscure the straightforward purpose of these verses in Philippians 2. Paul’s primary intention in writing them was to present Jesus as the example of a humble mind. The apostle could have written scores of pages of exhortation and rebuke in response to the Philippians’ bickering and anxiety. But instead, he turned their attention to the very essence of the Gospel, summed up in a three-word phrase — look to Jesus. Paul does not address our need for humble unity by scathing rebuke or flawless logic. The most powerful argument — the most compelling reason for us to live distinct, transformed lives — is the person and work of Jesus Christ.

Before considering Christ’s mindset, we need to understand what Paul means by his imperative, “Let this mind be in you, which was also in Christ Jesus.” Does it mean that we automatically think like Jesus because we are united to Him by faith? Or does it mean that Jesus displayed a certain mindset that we must adopt in our relationships with one another? It is true that our union with Christ brings tremendous spiritual benefit. But this particular passage uses parallel language — “in you” and “in Christ” — to emphasize that Christ is our perfect pattern. He is the image to whom we must be conformed (Rom. 8:29). We must think like Him.

PHILIPPIANS 2:5–6
Let this mind be in you, which was also in Christ Jesus: Who, being in the form of God, thought it not robbery to be equal with God.

Let this mind be — to think; to ponder; to set one’s mind on

Form — outward appearance; shape; “that which truly characterizes a given reality”[1]

Thought — to think; to consider

Robbery — something to clutch or prize; the act of seizing

So how did Christ think? First of all, Paul provides an insider’s glimpse into Jesus’ character and mindset prior to His incarnation. Paul states Jesus’ deity emphatically: “Who, being in the form of God, thought it not robbery to be equal with God” (2:6). The phrase “the form of God” refers to Christ’s inner character and divine attributes; the essence of His character is the very nature of God. The writer of Hebrews says that the Son of God is “the brightness of his (Father’s) glory, and the express image of his person” (Heb. 1:3). Paul further confirms this truth by declaring that Christ is perfectly equal with the Father.

So, what is the disposition of deity? Even in His eternal state, the Son of God expressed humility in the way He thought. He didn’t hold on to His equality with God the Father like one who selfishly clings to a treasure, unwilling to let it go. He didn’t hoard things; He gave them away. He “thought it not robbery to be equal with God” (Phil. 2:6). In other words, equality with God does not consist of grasping but of giving away. His disposition is that of a giver.

PHILIPPIANS 2:7
But made himself of no reputation, and took upon him the form of a servant, and was made in the likeness of men.

Made himself of no reputation — to make empty; to render void

Took upon him — to take; to receive

Paul presents a second aspect of Christ’s mindset through His humble incarnation. The humility of God the Son did not remain in glory. Jesus “made himself of no reputation” (2:7). His character, in conjunction with His Father’s will, compelled Him to empty Himself — to come to earth and be born as a man. This statement refers to Jesus’ surrender of the following privileges and rights in becoming a man:

He set all these rights aside to become the Redeemer and Mediator between God and man.

In this self-emptying, Jesus took on the form or essence of a slave. He retained “the form of God” but added to it “the form of a servant.” He chose this mindset before His incarnation; and as the promised Messiah, He came as His Father’s servant. Seven centuries earlier Isaiah had prophesied the incarnation with these words of God: “Behold my servant, whom I uphold; mine elect, in whom my soul delighteth; I have put my spirit upon him: he shall bring forth judgment to the Gentiles” (Isa. 42:1). While on earth, Jesus confessed, “For I came down from heaven, not to do mine own will, but the will of him that sent me” (John 6:38).

Paul says Jesus “was made in the likeness of men” (Phil. 2:7). The term likeness could be misunderstood to convey that Jesus only appeared to be human. But Scripture clearly records that Jesus Christ did not merely go through the motions; He fully identified with the human race. He came to earth, “was made a little lower than the angels” (Heb. 2:9) and subjected Himself to all the experiences of weak humanity — hunger, thirst, pain, tears and death — with one exception. He lacked a sinful nature. Christ exemplified a humble mindset by pouring Himself out for the redemption of sinners.

PHILIPPIANS 2:8
… and being found in fashion as a man, he humbled himself, and became obedient unto death, even the death of the cross.

Being found — to find; to discover; He was seen to be

In fashion — outward appearance; form; shape; that which makes something recognizable; everything in a person which strikes the senses

He humbled himself — to lower; to make low; to humble; to humiliate; to take the lowest place

Unto — until; as far as; to the point of; to this degree

By coming to earth as a man, Jesus Christ unveiled His humility for all the world to see. Had He stooped to become a king, He still would have been the humblest man who ever lived. Instead, He took the lowest position in every choice of life. No one judged Him to be divine by His appearance, and He grew and developed just like any other child. In His lifestyle, He chose the path of poverty and suffering. In His ministry, He reached out to the poor and to society’s outcasts. However, we see the ultimate manifestation of His humility in His complete obedience to His Father’s will when He died on the cross for the sins of the world. He lowered Himself as far as possible when He “became obedient unto death, even the death of the cross” (2:8). To the Roman mind, crucifixion was the vilest death imaginable. A crucified Messiah didn’t meet the approval of many Jews either. They assumed Jesus was accursed (Deut. 21:22–23). But that shame paled in comparison with the agony of bearing “the iniquity of us all” and being forsaken by His Father (Isa. 53:6; Matt. 27:46).

Through his account of Christ’s descent from heaven to earth to the cross, Paul paints a perfect picture of humility. This kind of attitude unifies the church and fulfills God’s command to live worthy of the Gospel. In order to unify for the sake of Christ’s Gospel, Christ’s people must humbly conform to Christ’s mindset. 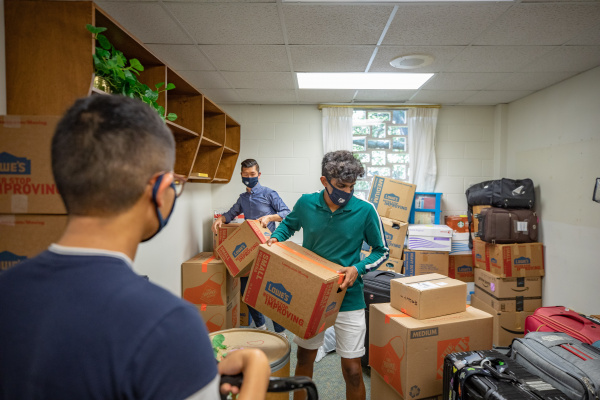 The Call to Humility