An American Spiritual Ensemble performance is a journey through our nation’s music history.

“We try to offer a variety of styles, and one of the reasons we do that is because I call spirituals the mother music,” said Dr. Everett McCorvey, the group’s founder and artistic director. “It’s the music that really got it all started.”

The acclaimed American Spiritual Ensemble will present selections from its deep repertoire of classic spirituals and other genres at 8 p.m. February 19 at Founder’s Memorial Auditorium in the penultimate performance of its winter concert tour and celebrate Black History Month.

Springing up from Ephesians 5

The African-American spiritual is a type of religious folk song that is closely associated with slavery in the United States and served as a way to express the community’s new Christian faith as well as its sorrows and hopes. Stories from the Bible, such as Israel’s exodus from Egypt, the Babylonian captivity and Daniel in the lion’s den, resonated with slaves as they saw parallels to their own experiences.

The term spiritual is derived from spiritual song, from the King James Bible translation of Ephesians 5:19: “Speaking to yourselves in psalms and hymns and spiritual songs, singing and making melody in your heart to the Lord.”

“They created their own songs about these stories. It began with a cappella songs they sung in the fields and in the camp meetings. From this music grew all sorts of different styles—from jazz to blues to gospel to Broadway tunes—and we try to keep some of that as part of our repertoire to show how the spirituals have evolved into so many different styles. It has helped create what we would call today the American sound.”

McCorvey noted that gospel music, like jazz, the blues, hip hop and other genres, “is a 20th-century phenomenon” evolved from spirituals and, understandably, was born in churches.

“People think of spirituals as gospel music, but gospel music is ‘How would you get from spirituals to gospel?’ Around the 1920s and ’30s, churches began hiring musicians to play in churches,” he said. “Imagine a pianist who knew how to read music and made their living playing in nightclubs on Saturday night and were hired on Sunday morning to play in church. All of a sudden, you’re hearing a hymn like Nearer My God to Thee and you get a few blues notes infused into that hymn.

“That’s the time radio became popular, and then you had people like Mahalia Jackson who were singers in the church who sang this gospel music that was infused with chords found in more popular styles of music. With radio and the infusion of jazz and blues musicians becoming church musicians, the styles began to spill over.

“You have the whole call-and-response idea where you have a caller and the person to respond. Elvis Presley and Jerry Lee Lewis took on that style. They heard this black music and they imitated a lot of it in their works, the difference being they had a lot wider venue to perform.”

Growing up in the South

McCorvey, 61, experienced spirituals and gospel music at churches a block apart in his hometown of Montgomery, Alabama, while growing up in the racially-charged 1960s and ’70s. His mother attended an African Methodist Episcopal (AME) church and his father attended First Baptist Church, where Ralph Abernathy—a leader of the nonviolent Civil Rights Movement alongside Dr. Martin Luther King, Jr.—was a minister.

“Both churches celebrated the spirituals and hymns,” said McCorvey, whose 95-year-old father continues as an active member of First Baptist Church. “As a child, I would hear these great choirs that came through Montgomery in support of the Civil Rights Movement from Tuskegee, from Hampton, from Morehouse. The sound is still in my head.”

McCorvey, who is a professor of voice at the University of Kentucky and the director and executive producer of opera theatre at the university, founded the American Spiritual Ensemble in 1995.

“I wanted to celebrate these traditional Negro spirituals because I wanted to make sure this music was not lost,” said McCorvey, a tenor who made his professional singing debut in 1983 as Nelson in a revival of George Gershwin’s Porgy and Bess at Radio City Music Hall in New York City.

“This gospel music in the ’30s became the sacred music and replaced the spirituals. The Five Blind Boys of Alabama, composers like Thomas Dorsey and his most famous piece, Precious Lord Take My Hand, became a sensation in churches. He’s been credited as the father of the modern gospel music. These spirituals, these beautiful melodies sung a cappella, were beginning to be lost and replaced by piano, bass, drums—the same instrumentation that you would have in a blues club.”

The American Spiritual Ensemble roster of 120 professional performers—of which about two dozen form each concert group—has toured the country each year and internationally several times, presenting music representing different genres with spirituals as the wellspring. Many of the members have sung on the stage of the Metropolitan Opera, the Kennedy Center and other great halls around the world.

“It’s been an incredible journey these 24 years. I’m humbled that the interest in the group continues to be so strong.”

“When we are giving concerts, it’s more than just a concert,” he said. “It’s a worship experience and people sense that.”

The American Spiritual Ensemble last performed at BJU in 2012. McCorvey said he’s looking forward to engaging the students on campus and the audience during the concert.

“This is American music. No other country can lay claim to this and this music is popular all over the world. The message of this music, the beauty of the melodies, the simplicity speaks to people.” 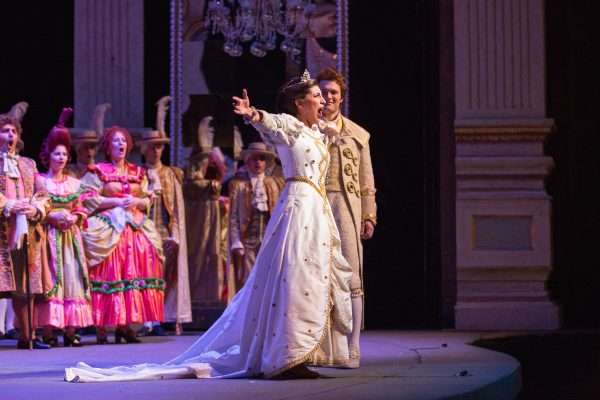 The Phantom (Menace) of the Opera